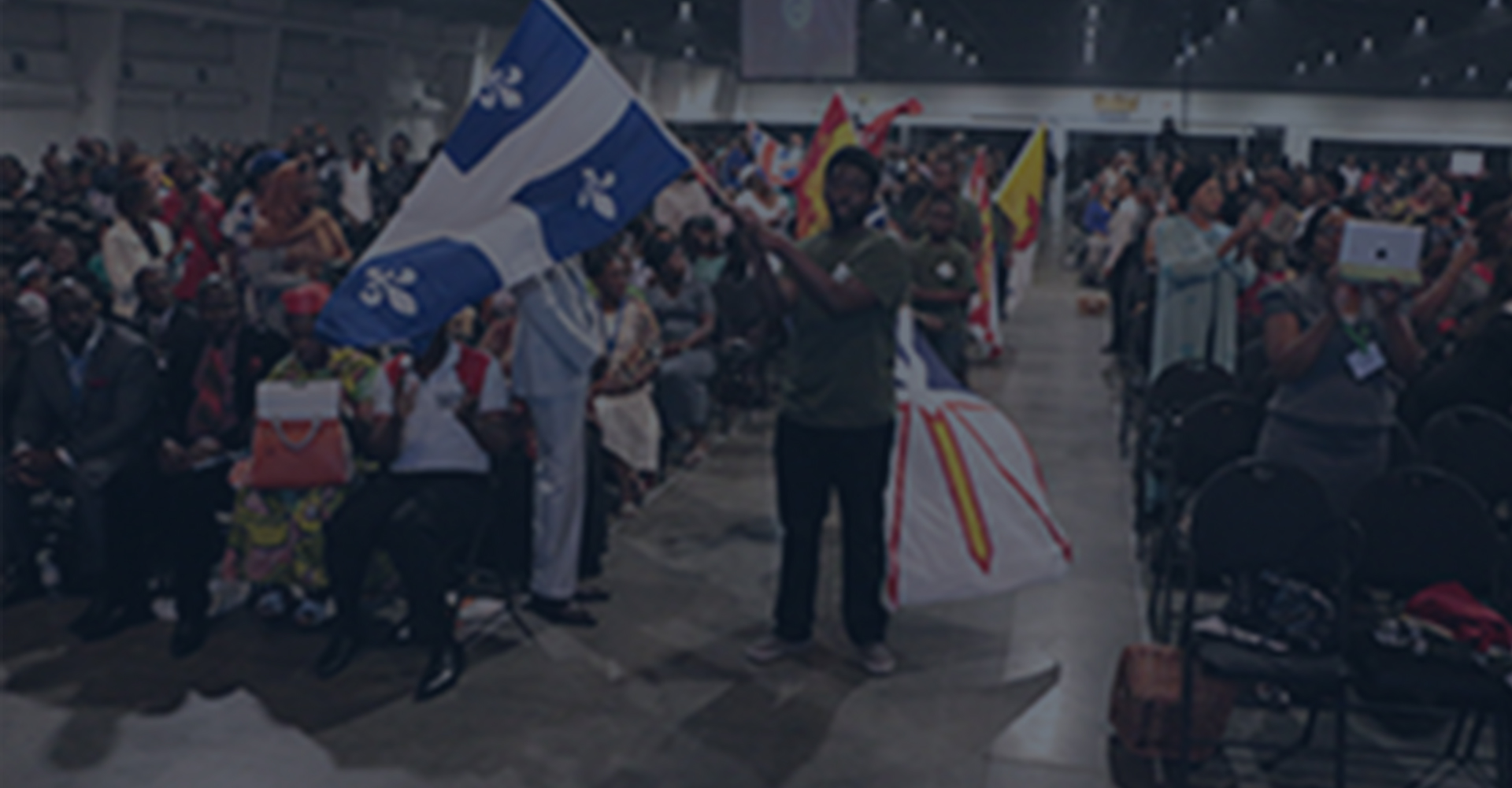 A Brief History Of The Redeemed Christian Church Of God Canada

A member of the RCCG migrated to Toronto Canada in November 1994 not as a pastor or missionary but to seek the proverbial greener pasture.  On his arrival, he sought for a parish of the church to worship and eventually discovered that there were none in Toronto or anywhere in Canada.  After a while, he started fellowshipping at CAC Agbala Itura in Toronto.  As at this time, there were few Pentecostal churches with the kind of flavor that he was used to and CAC in his words,  “offered the closest form of worship I was familiar with.”

He continued, “At a point, I remembered a discussion I had with my mentors in Nigeria,  Pastor and Pastor Mrs. Obafunsho  Ayinoluwa (formally Awoyinfa), that on getting to Canada I should look for the possibility of establishing a Redeemed Christian Church  in Toronto Canada.  Also, as part of my training as a worker of RCCG in Nigeria, we were encouraged to start a house fellowship anywhere we find ourselves.”

“The Ayinoluwas later linked me up with some of our members they knew that were already in Toronto, namely sisters Bisi Odukoya and Mrs Lee. After linking up with them and sharing the vision of starting a fellowship with them, we commenced a fellowship at a Food Court at Scarborough every Wednesday in May 1995.  As a fellowship we were told that a pastor would be sent from Nigeria when membership hit an appreciable number.”

“I stayed in constant touch with the Ayinoluwas who continued to be a source of encouragement at the time. I periodically updated him on the development of the fellowship and he informed me later that the report had been tabled before our  then Area Pastor,  Pastor Ayo Adeloye and that he will be coming to Canada to formally inaugurate  the Church and do all the paper work and registration. “

“I was truly encouraged by this information. Pastor Adeloye came to Toronto in 1995 to formally inaugurate the church at Quality Inn Scarborough.  Attendance at the dedication was 20. He also completed the church registration paper, and I was appointed the statutory church agent in Canada. After the initial inauguration, Pastor Ayo Adeloye promised to send us a parish Pastor.  Several attempts were made to secure visa for a pastor to come over to Canada but to no avail.”

It is important to highlight the importance of divinity in the start up of an RCCG parish in Canada.  When Pastor Ayo Adeloye went to the embassy to secure a visa, he was initially denied but the General Overseer Pastor E. A.Adeboye told him to go back and he was given the next day.  This definitely shows that the King of Glory had decided to make the RCCG in Canada a conduit through which many will benefit of the saving grace of the Lord—Jehovah with the emphasis on holiness without which no man shall see the Lord.

In the meantime, we continued to receive support and encouragement from some pastors of the RCCG in the USA, Pastors Toye Ademola, Dave Okunade & Ajibike Akinkoye. They used to take turn to fly in from Texas to Toronto, to minister to the new church.

In 1996, I received news that the General overseer will be visiting Toronto in 1996 to dedicate the church. We started looking for a permanent place of worship and the Lord led us to 1181 Finch Avenue Toronto.  This is where the church known today as Covenant Chapel, Toronto was dedicated  to the Lord as the first RCCG church in Canada in May 1996 by the General Overseer – Pastor E.A Adeboye. The question of a pastor for the parish came up again and Daddy GO promptly answered that God has provided a pastor. The General overseer Pastor Adeboye went on to confirm me, Pastor Daniel Ishola, as the first Parish Pastor of Covenant Chapel Toronto.

The tremendous support and encouragement of Pastor James Fadele, RCCGNA Chairman Board of Coordinators at this initial stage cannot be overlooked as well. He drove all the way from Detroit to attend the first year anniversary of Covenant Chapel Toronto in 1997 and has remained supportive ever since. Several other individuals have labored tirelessly and built upon this initial ground breaking in Canada. Heaven have taken note of such labor and God will reward them mightily.

In 1997, The Lord impressed it on my spirit to go and take over the Capital of Canada. We therefore moved to Ottawa Canada to plant another church and  named it Overcomers Parish. Those who played key roles and assisted in moulding the church at the time included the following; Sister Idowu, a former staff at the Nigerian High Commission in Ottawa; Adetokunboh Aluko, Abimbola Akinfenwa, Tope Oderinde – all were students at the University of Ottawa, and Bro Ayeire who used to stand in for me anytime I was unable to make it to Ottawa for service, as I used to drive miles from Toronto to Ottawa to conduct service.

We secured YWCA auditorium for our use in Ottawa until toward the end of 1997. That same year the Lord directed Pastor Segun Orimoloye to join the church having secured a Canadian landed immigrant status with his family.  He was officially appointed the first Parish pastor of Overcomers Parish Ottawa.  Later, Pastor  Bowo Olagbegi started a parish (Throne of Grace) in Windsor Canada, while Pastor Tokunbo Okunnu started International Christian Center at Winnipeg Canada.

I worked together with Pastor Andrew Adeleke from London to work on the initial take off of House of Praise Mississauga Canada until I left Toronto on August 5th, 1999. That same year, 1999, because of the need to sort out my immigration papers in Nigeria, I handed over the pastoring of RCCG Covenant Chapel to Pastor Tayo Ojajuni. As fate would have it, I was redeployed to Columbus, OHIO in the USA in 2001.

Shortly after the commencement of House of Praise Mississauga which had initial workers like Bro. Dapo Kolawole and Deacon Tunji Ajayi, another parish of the RCCG was birth in the city where the first fellowship started from—Triumphant Chapel, Scarborough.  The name was later changed to Jesus House Scarborough.

Over the years, several other parishes have commenced one of the key highlights was the commencement of two parishes on the same day in 2003—Jesus House Toronto and Kings Court, Brampton.

From such humble beginnings—humble in the sense that the pioneer pastor of the mission in Canada never thought he was going to be a pastor, (It was not part of his agenda at all but Divinity had other plans.  In the words of Pastor Ayo Adeloye, “When I looked at the status and the composition of the then members of the church, I realized that it is only God that can build the church.  Therefore, I connected the first parish to the covenant between the founder of the church—Pa Josiah Akindayomi and God hence the name Covenant Chapel.”) we now have about 80 parishes of the church.

We are delighted to observe that God has prospered His work in Canada. What started as a fellowship of three has blossomed into 80 parishes, 7 zones with Canada having its own administrative headquarters in Ottawa. I Daniel Ishola, as the unlikely candidate for the position of a pastor has equally experienced and enjoyed the grace of God in my life and ministry. We give to God all the glory.